As National Mentoring Month comes to an end, we were honored to be able to sit with our CEO/Executive Director Steve Bulger and his mentor, Rosario “Russ” Dalia in the Dalia Family Conference Room at ICAN headquarters to talk about professional and personal mentoring, coaching and legacy. 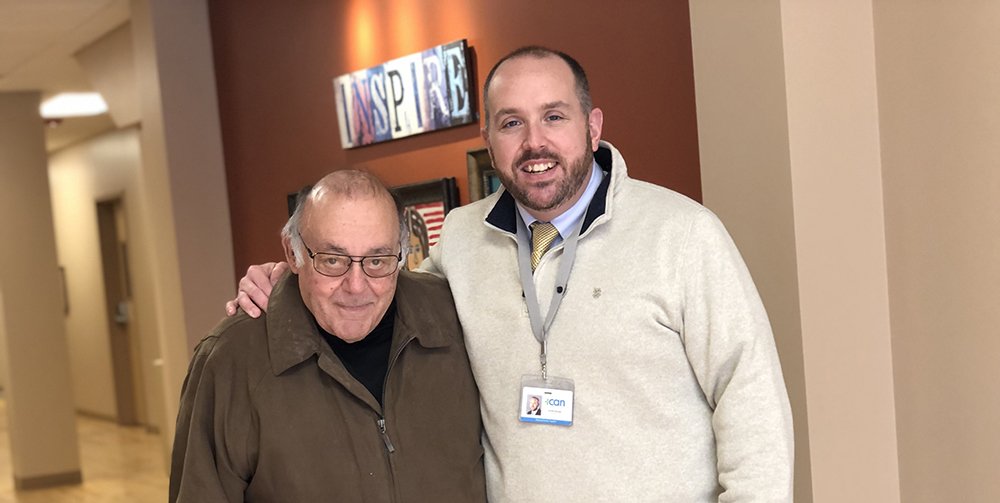 The two met when Russ was on the board of ICAN and Steve was the Director of Operations. Steve would come to the board meetings to give updates and he would see Russ at the agency’s golf tournaments and fundraisers – he was the board member who was always there. When Steve became the interim executive director of the agency in 2014, Russ was the board president. They began spending a lot of time together and their more formalized mentorship began.

They had a lot in common from the get go. Both had an unexpected change in their career paths. Steve had originally planned to be a lawyer and Russ was heading into the medical field, but organic chemistry had other plans for him.

Coaching was also something they have in common. When they would get together they’d talk business, but Steve would also run football plays by him to get some insight or talk about an upcoming game. Analogies from the sports world and real life filled their conversations.

Russ was a teacher and coach for decades in Herkimer and you would be hard pressed to find someone in Herkimer who hasn’t heard of “Coach Dalia”. He was a science teacher and coached football, swimming and tennis. Tennis was one of his first loves ever since he was a kid growing up on Bleecker Street in Utica, trekking down Mohawk Street to the Parkway tennis courts to play. He was inducted into the Utica Sports Hall of Fame for his work coaching tennis and he is particularly proud of his team’s 1993 national title.

When Russ first started teaching in 1963, he got a plan book from his principal who sent him off with a solid “good luck!” and offered no mentorship. There was one individual who helped him along the first three years, showing him what to do and not to do, but that was the extent of his own early career mentorship. When he later worked at the Psych Center in Utica, he got to know more about human behavior. When it came to coaching he taught himself, buying books, talking to people and developing his own style over the years. That’s “how Russ became Russ.”

That experience and style he honed along with the way were imperative to Steve as he began his new leadership position in 2014.

Off the bat, Steve was tasked with two things: to run the organization and to assure fiscal strength for the agency. Russ took on the board president role with gusto, mentoring Steve and acting as a “hockey goalie” to allow him room to breathe, room to grow and time to do his work with as little interruptions as possible. In Russ’ mind, the board had to have a collective vision and should give him the tools. He has to be able to use those tools.

“Sometimes you have a mentor that tells you what you need to do, that’s that… and that’s their style,” Russ explains. “What I learned for years as a teacher and coach is that you offer support – that’s the key word. You make suggestions, but the mentee has to be able to see it in his mind’s eye and put it all into play.” Russ’ main goal was to help Steve SUCCEED. He shared, “My question to Steve would be ‘how do we make it work?’ That’s mentoring.”

Steve had never had a professional mentor in that capacity before. When he was in college and working at the Niagara Boys and Girls Club as an 18 year old (which was the experience that would change the trajectory of his career) he had a direct supervisor named Antoine Bradberry who helped him learn the ropes and gain the trust of those the club was serving. His relationship with Russ took mentoring to a whole different level and Steve agrees that it takes a lot to open up yourself to be a mentee.

“You have to like each other first,” Russ says with a hearty laugh.

“And TRUST is the biggest piece,” Steve adds.

Steve knew he could trust Russ rather quickly. Russ would listen, digest, would give feedback (sometimes not what he wanted to hear!) and he would never sugar coat things. “He would let me stumble and then we would reflect on it. When things get hot, you know who you could turn to.” Russ also uses humor as a great decontaminate to diffuse situations and his even keeped nature keeps stress levels low and keeps everything moving forward.

What Russ immediately saw in Steve was honesty. “You don’t see that today.”

Steve believes the leader we become is a mix of the good and the bad you had previously experienced and was appreciative that Russ always positioned himself as a colleague by his side. “True!” Russ agrees, “I’m by his side. I’m not behind him pushing him… I’m by his side supporting him. One of my favorite quotes is ‘leadership is essentially a moral act. It’s not the assertion of a style’.” 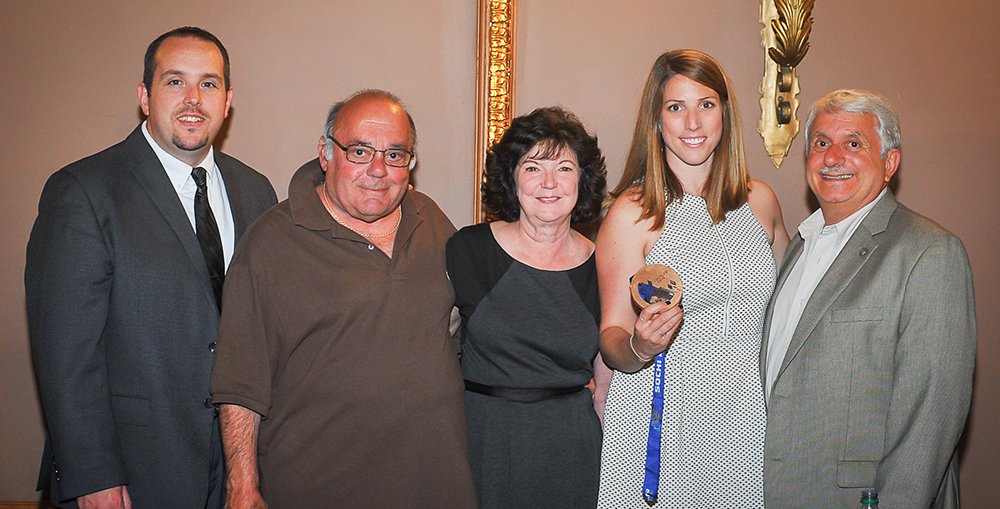 One piece of advice that will always stick with Steve is having the “meeting before the meeting”. That helped them both be prepared, work through every scenario and consider all the ramifications of what they were doing. He still practices that today.

Russ’ guidance has even helped Steve and his family ease into the position of CEO. A position like that brings worry about excessive time spent at work and your personality changing with the role. Russ’ advice? “CEOs change. People change. It’s not the seat that determines the man, it’s the man who determines the seat. Don’t change - you be you.” Steve likes to think he’s the same person he was in 2014 and that he’ll be in 2044. He strives to lead his executive team now in many of the ways that Russ has led him all these years.

Three board presidents later, many fundamentals which Russ implemented are still in place.  Steve shares that Russ has influenced the “solution-focused approach that I lead with. You can’t give everyone all the answers to the test. You have to let people learn and develop. We’ve created a leadership style internally at ICAN that fosters that.”

Russ, never one to talk much about, himself shares, “It’s not about me. It’s more about him and how he develops as a person and as a professional. What I do affects him in both those ways tremendously.”

When Russ is asked how he would like to be remembered, after a thoughtful pause he shares, “That I was a good guy. I was helpful in assisting other people. And I tried to always be genuine.”

Then in true Russ style, uncomfortable with the focus on him, he turns it over to Steve.

“You’re Russ. There’s only one Russ. It’s genuine, caring… it’s your heart. He likes to prop other people up, because it’s all about others – it’s always been about his wife, students, and his athletes. If we had more of that in the world….” 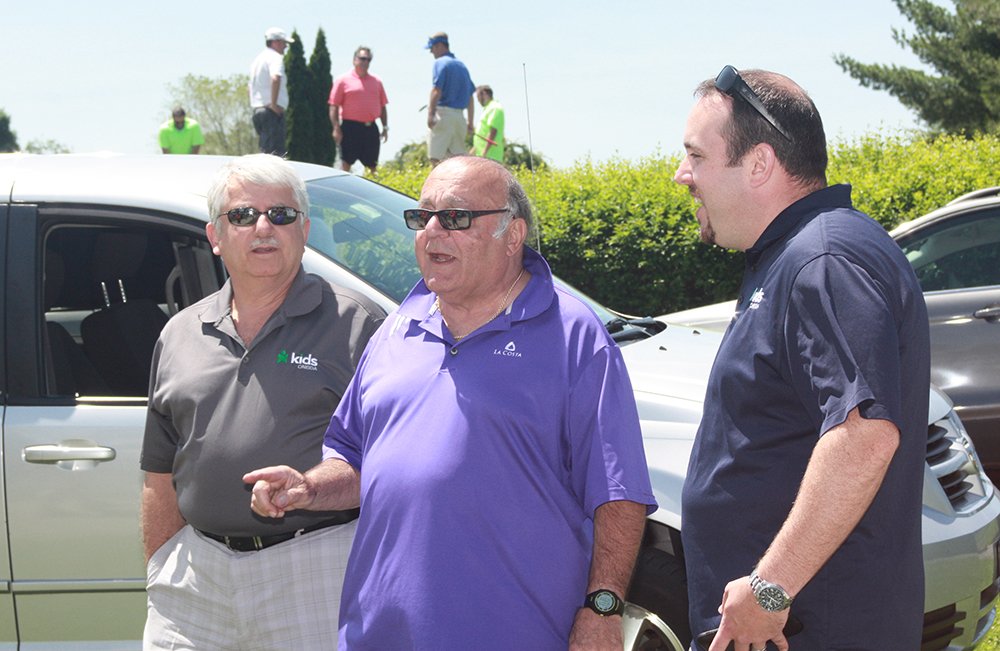 What has mentoring meant to Russ? “It’s a sense of doing something, a sense of accomplishment for me, for him [Steve], for the kids I used to coach. They trusted me to impart knowledge onto them. There is no set formula for this work - each situation and person is different. You do your best. Use what you have done and what you have learned along the way.”

Mentoring is something that is appreciated greatly and utilized frequently at ICAN. Steve concludes, “it is one of the most therapeutic services we have for our clients. If it can work so well for our kids and families at ICAN, it’s got to be good for me at the same time.”

We are so glad we had an opportunity to hear from Russ and Steve and to see their relationship in action, the results of which we can truly see and feel in action through the culture of ICAN. We thank them both for their continued leadership and care for each other, for our staff and our families, and for all the many families we serve each day.

On a personal note:

Russ and his wife hold an amazing Halloween event in their garage each year. They give out LOTS of toys –not candy – and kids come to play games and win toys OR envelopes with money on it that adorn the walls. Steve has taken his kids since 2014. His daughter is still delighted by the toys, but his son has evolved to the point where he goes for the money!